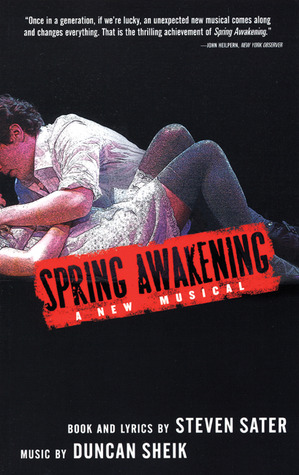 “This brave new musical, haunting and electrifying by turns, restores the mystery, the thrill to that shattering transformation that stirs in all our souls.”—Charles Isherwood, The New York Times,“The staggering purity of this show will touch all open hearts…In its refined, imaginative simplicity, it daringly reverses all the conventional rules by returning the American musical to an original state of innocence.”—John Heilpern, The New York Observer,“An unexpected jolt of sudden genius, edgy in its brutally honest, unromanticized depiction of human sexuality.”—New York Post,Spring Awakening is an extraordinary new rock musical with book and lyrics by Steven Sater and music by Grammy Award-nominated recording artist Duncan Sheik. Inspired by Frank Wedekind’s controversial 1891 play about teenage sexuality and society’s efforts to control it, the piece seamlessly merges past and present, underscoring the timelessness of adolescent angst and the universality of human passion.,Steven Sater’s plays include the long-running Carbondale Dreams, Perfect for You, Doll (Rosenthal Prize/Cincinnati Playhouse), Umbrage (Steppenwolf New Play Prize), and a reconceived version of Shakespeare’s Tempest, which played in London.,Duncan Sheik is a singer/songwriter who also collaborated with Sater on the musical The Nightingale. He has composed original music for The Gold Rooms of Nero and for The Public Theater’s Twelfth Night in Central Park.